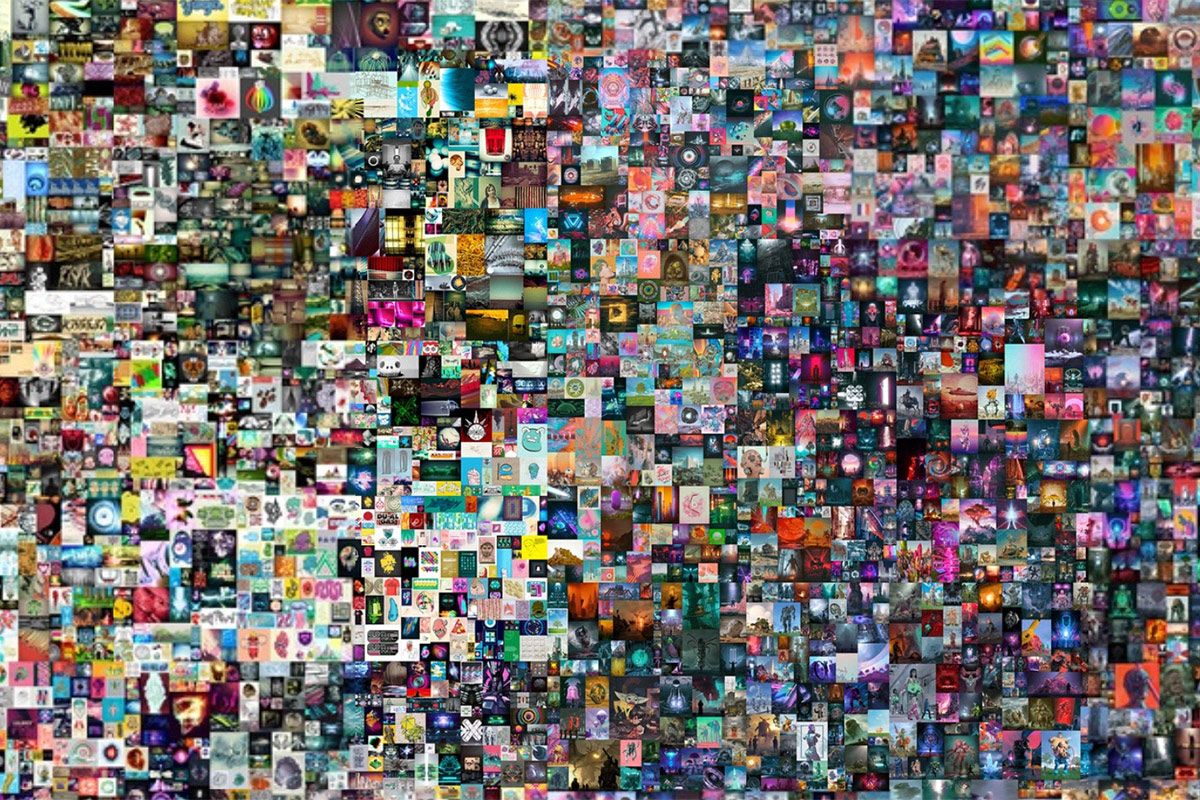 Christie’s is making moves into the emerging digital art market and is selling what it described as the first-ever purely digital artwork offered by a major auction house.

Everydays: The First 5000 Days (2021) by Beeple is a digital collage consisting of 5,000 images made over the course of 13 years. The artwork is unlike anything the auction house has ever sold. Not only is it not physical art, but this sale also comes without a predetermined estimate, with bidding starting at $100.

The artwork carries a non-fungible token (NFT), a unique digital token that is encrypted with the artist’s signature that verifies the work’s ownership and authenticity and is permanently attached to the piece. Presently, the work exists as an encrypted file, and its purchase at the end of Christie’s auction will be registered on the blockchain.

Christie’s is proud to offer “Everydays – The First 5000 Days” by @beeple as the first purely digital work of art ever offered by a major auction house. Bidding will be open from Feb 25-Mar 11.

The auction comes at a time when the fine art market is rapidly expanding beyond its traditional confines and becoming more embracing of digital media and creators’ use of computer-generated imagery as original work.

With Everydays: The First 5000 Days Christie’s is trailblazing a new age in contemporary art. Not only is this an entirely new venture for the auction house it could also be a milestone for NFT-based art, but what does that even mean? Tired of head-scratching (and feeling old) we decided to speak to Christie’s directly about the auction. Excerpts of that conversation you can find below.

First of all, crypto art?

Beeple identifies as a digital artist, as opposed to a crypto artist, meaning that his work is created using digital means as the medium, but does not focus on cryptocurrency. Works of purely digital means are also called NFTs. An NFT is a unique and unforgeable token encrypted with the artist’s signature and uniquely identified on the blockchain, effectively verifying the rightful owner and authenticity of original digital artwork.  The NFT for this work has been uniquely generated by MakersPlace, a premier marketplace for digital creators.

Why did Christie’s choose Beeple’s Everydays: The First 5000 Days for this historic auction?

Beeple has developed a very established market among digital art collectors and has sold high-value works on platforms that specialize in the sale of digital works, such as Makersplace.  Given his leadership within the digital art world, the opportunity to offer his work at Christie’s seemed a perfect fit for the first completely digital work of art ever sold at Christie’s.

While the auction will begin at $100, how much do you really expect this artwork to sell for?

As this is a first for Christie’s, the work will have an “Unknown Estimate,” with a starting bid of $100. We expect the work will see very significant competition for established collectors of Beeple’s work, and those that are completely new to digital art. We felt that it was very important to let the market dictate the price on this unprecedented work, and by offering an opening bid of $100 we are inviting collectors at all levels of the market to participate.

Why do you think it has taken so long for digital art to breakthrough?

Digital art has been an artistic medium since the introduction of personal computers, but only since the introduction of blockchain has it been possible to establish ownership and therefore market value. This market is exploding at a moment when the global community has become fully accustomed to experiencing art through their screen. Like every other major gallery, museum, and auction house, Christie’s has spent the year developing digital tools that optimize their at-home art-viewing experience. So perhaps, this is the time that the world is finally ready and able to embrace this medium – both from the buyer’s and seller’s perspective.

How do you see this technology impacting the art world? Are we looking at a dramatic generational shift in the art community?

We see this as a pivotal moment for the future of new media and even the practice of collecting itself. The First 5000 Days is a monumental work comprised of 5,000 individual images created over the course of as many days, giving viewers the opportunity to zoom in and witness Beeple’s often irreverent but always engaging evolution as an artist pixel by pixel. The capacity to represent 13 years of an artist’s career in a single work perfectly illustrates the limitless nature of this medium. Not unlike the advent of Street Art as a blue chip-collecting category, NFT-based art is on the threshold of becoming the next ingeniously disruptive force in the art market. Christie’s is proud to be in the vanguard of this exhilarating movement.

Christie’s is so well established in the traditional fine art world, what are your hopes with this sale and your foray into the digital art market?

Christie’s is confident in the future of the market for digital art, and it looks forward to continuing to explore this expansive sector of the art market. At present, Christie’s does not have any plans to announce but is interested in embracing the development of new technology and its impact on the creation of art and its market.

Bidding on Beeple’s Everydays: The First 5000 Days runs from February 27 to March 11 at Christie’s. The auction house will accept Ether as payment.