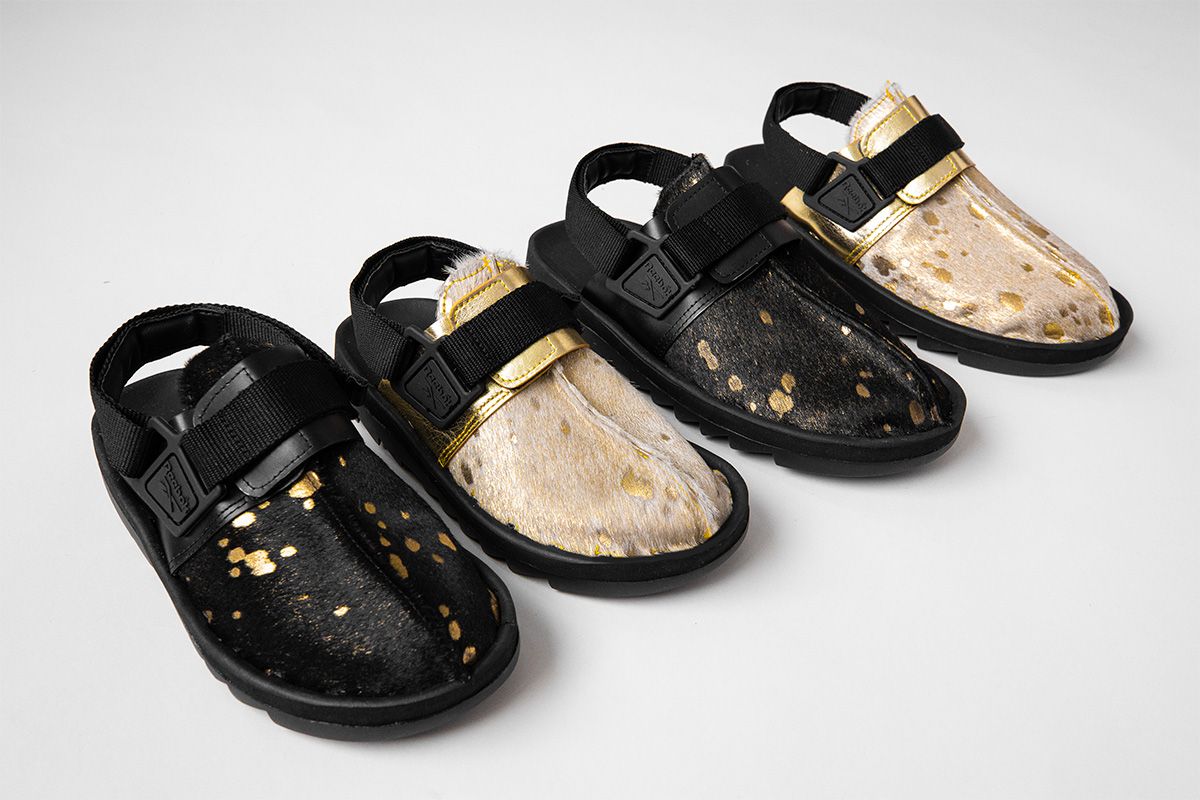 To celebrate the launch of Monster Ultra Gold and the new class of creatives embracing it, we’re profiling up-and-coming artists excelling in their craft. They’ve also reinterpreted the can’s bold colors and turned it into an exclusive capsule collection of their work, which we’re sharing here.

Junghoon Son, the man behind VANDYTHEPINK, quickly made a name for himself customizing sneakers, including everything from Air Forces to Vans. His designs have since grown to clothes and objects, attracting a celebrity clientele.

We caught up with Son, who recently joined forces with Monster to create custom jackets and Reebok Beatniks to celebrate the launch of Monster’s Ultra Gold can. He spoke about the project, how he got his start, and the meaning behind the name VANDYTHEPINK.

My name is Vandy and I created the brand VANDYTHEPINK. VANDYTHEPINK was founded in 2017, and has been a brand that I’ve used to express myself. I had a lot of interest in fashion growing up so I’ve always researched clothing and trends. I never went to school for fashion, but I’ve learned a lot from my environment.

As a kid I was always into doodling. I had these shoes that were super beat up, but I didn’t want to throw them out so I drew on the shoes. It was something different since it gave that pair of shoes a new look and basically a new life. If I kept customizing the shoe it would look different every single time, giving it a whole new vibe. Another thing that really pushed me into customs was that every time I wanted to buy from a brand, they never had a silhouette, shape, or a design that I liked, so I ended up taking it into my own hands and created pieces from fabrics or shoes of familiar brands.

My very first custom sneaker that I created was when I was kid. They were Air Forces and they were super dirty. I ended up coloring them to colors that Nike has never come up with. I felt like the biggest flexer in school.

My first custom sneaker that really put me in the scene was Air Forces that I painted Mew (Pokemon) as the swoosh, which was reposted on Tumblr and Instagram. I did that for myself because I love Pokemon and it unexpectedly got a lot of attention on Instagram.

I started out hand painting a lot of jackets and shoes, but I started experimenting with fabrics and the sewing machine. I moved away from hand painting and started sewing fabrics together creating clothes and reimagining shoes. One of the first things with another fabric was the Ikea track pants, vest, and bucket hat. This was right after I saw Demna’s [Demna Gvasalia] Ikea-inspired Balenciaga bags. The set I created went crazy on the internet. Ikea employees even approached us to create a small project with them, but I was young and super naive so I ignored the offer. Something I still regret till this day.

My main inspo for this project is a home vibe since everyone is at home due to Covid-19. I want to make comfortable clothing/shoes since people don’t have a chance to wear sneakers right now. So I decided to add a little spice to the Beatniks that everybody currently loves, which is a great shape from Reebok.

K-pop culture is crazy in Korea. They look up to their idols and how they dress. G-Dragon had such an impact on fashion during that time, which made the Air Forces and Uptempos blow up. Uptempos were probably the hardest thing to get in Korea when he first wore them but easier in the U.S. Just like in the U.S., we look at our favorite singers’ outfits and would want to have the same clothes as them. Since K-pop has such a huge impact in Korea, a lot of fans get what their famous idols want.

My name VANDYTHEPINK comes from the name of my mom’s clothing store when I was a kid. It was meaningful because it was a store that she had to close down in order to raise me and my brother. Vandy in Korean is 반딧 (firefly) and is a symbol for hope for me since a firefly glows in the dark. In the darkest times there’s always a light. “THE PINK” comes from the Korean phrase 핑크 빛 (pink light), it’s a metaphor for an optimistic and hopeful state. Before I first started the brand I wasn’t happy with my life or what I was doing, so VANDYTHEPINK became my 핑크 빛 (pink light), my hope, and happiness since it was something I loved doing.

My most memorable celebrity is Lisa from Blackpink. It wasn’t just a transaction, she actually treated us like family. Probably one of the kindest people I’ve met face to face. She was also the first person we gave our Burger Plush to. The Burger was something my girlfriend and I designed that really stuck with VANDYTHEPINK. Lisa showed it a lot of love, which gave us more confidence in pushing it out as our logo.