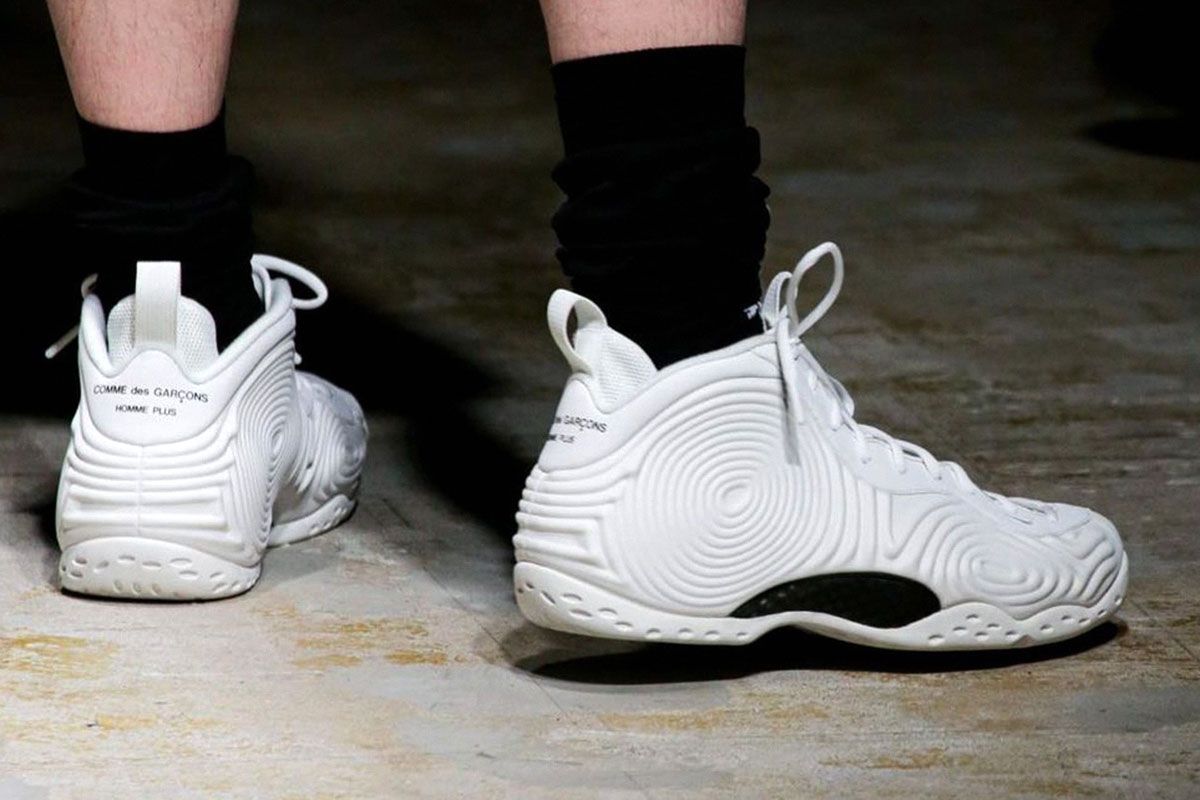 Debuting in 1997, the Nike Foamposite is as alien today as it was almost 25 years ago. The Foamposite upper, made from polyurethane liquid, was initially designed for use on the basketball court thanks to its ability to mold to the foot. It wasn’t long before the groundbreaking silhouette hit the lifestyle arena, though. But while the Nike Foamposite has never really broken into the mainstream, a string of collaborations have been as close as its come, culminating in a teasing look at a COMME des GARÇONS collaboration during a virtual FW21 Paris Fashion Week.

COMME des GARÇONS’ hypnotic take on the Nike Foamposite shows the collaborative potential that lies in a shoe as otherworldly as the Nike Foamposite, but it’s not the first time we’ve seen this potential. Whether we’re looking to Supreme collaborations, homages to YEEZY, or just fire general-release colorways, the Foamposite has been lurking in the shadows for many years now, and we’re hoping this could be a bigger breakout moment.

When directors Chris Butler and Sam Fell released the 2012 stop-motion film ParaNorman, we bet they didn’t think that it’d birth one of the most exclusive Nike Foamposite colorways ever. This 2012 release features a glow-in-the-dark outsole and an eye-catching neon smoke motif to the Foamposite upper and saw a limited release of only 800 pairs.

For much of the younger generation of sneakerheads, the 2014 Nike x Supreme Air Foamposite One was the iteration that put the Foamposite on the map. Characterized by a golden floral motif to the uppers, the pair was released in black and red colorways.

If in doubt, murder it out. This pair of 2020 Foamposites adds credence to the fact that an all-black model, when done well, can’t be beaten, especially when there’s as much going on structurally as there is on the Foamposite.

Pearlescent Foamposite forms the upper of the futuristic Nike Air Foamposite Eggplant. This model is both toned-down and a highlight thanks to the changing color of the upper depending on light conditions.

Remember the days when a YEEZY shoe released once every few years? If not, this colorway might be a welcome new arrival for you. Although the Foamposite was never officially altered at the hands of ‘Ye, this pair looks to Kanye’s signature Nike colorway to make its mark. Side note: this homage pair is now a veritable piece of sneaker history.

Simple and classic. We love a basic colorway when it’s done properly and this pearl and black combination is a wild success in our books. Featuring a large Swoosh to one side and dating back to 2010, this pair stands out as a rare gem in collectors’ crowns.

14-year-old Elijah Diggins, a patient at the Oregon Health & Science University Doernbecher Children’s Hospital, left his mark on the Nike Foamposite One as part of the Nike Doernbecher Freestyle Program in honor of his favorite athlete, Lebron James. The majority-red upper makes way for a black base color as well as subtle details like Diggins’ signature to the heel loop and tongue tag.

Although divisive, there’s no denying that the Foamposite upper provides a great canvas for out-there uppers. This pink pearlized iteration is all the proof we need. A transparent outsole allows the upper’s palette to leak into the sole unit for even more punch, too.

If summer 2021 is allowed to happen then you have to do something special to mark it. Why not introduce this explosion of a pair into your summer rotation? An advance warning, though, these may become blindingly bright in direct sunlight.

Our designated Selects section features products that we love and want to share with you. Highsnobiety has affiliate marketing partnerships, which means we may receive a commission from your purchase.