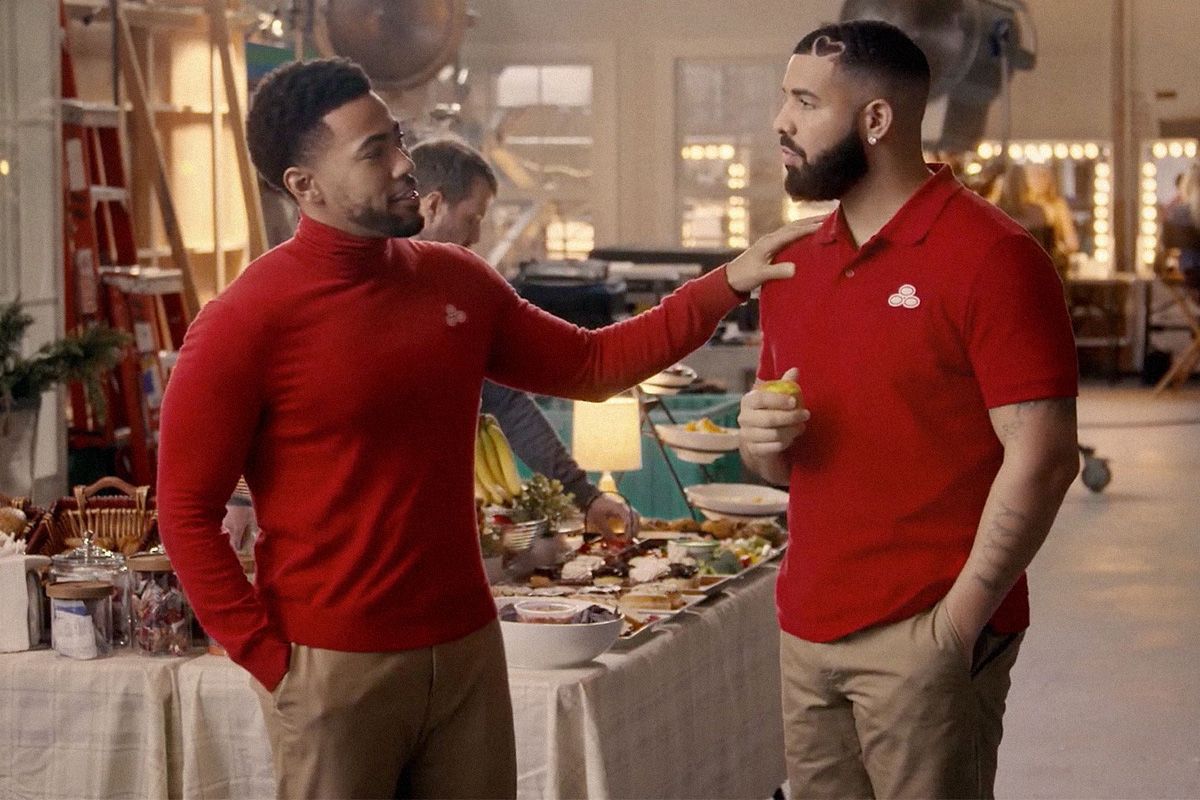 Among some historic wins for Tom Brady, the Tampa Bay Buckaneers, and diversity, there was Drake. The OVO artist cameoed in a State Farm commercial during the Super Bowl LV this weekend, and showed off a new hair situation while he was at it.

Although fans might be sad that his sixth studio album Certified Lover Boy remains nowhere to be seen, they can at least rest happy that the emo-style heart fringe that he debuted in November has been erased. Now that Drake has modified the side-swept bang into a more close-cut shave, the overall effect is less “RAWR XD” and more “U wot, mate?”

See for yourself in the clip below.

As a well-documented anglophile (see his love for soccer, Top Boy, and grime), Drake’s freshly shaved heart looks like it could be a softboy riff off a ’90s/early ’00s UK grooming phenomenon: the swoosh shave. During this period ardent sportswear fans requested Nike’s iconic logo shaved into their hair at the barbers; it was a symbol of tribal affiliation, rebellion, and a transcendent branding exercise for Nike, who found new advertising real estate on the skulls of young men across the UK.

I’ll never forget when Mandem used to get a Nike tick shaved in their hair pic.twitter.com/lP3QxPTvb8

In fact, it’s still listed on Peckham’s Jowas Barbers for £1. Not bad at all, and cheaper than the latest Nike drop. Like many aesthetic trends that endured the millennium, the style can probably be traced back to Dennis Rodman, whose ’90s hairstyles included a Chicago Bulls logo, crop circles, smiley faces, and an AIDS ribbon to draw attention to the HIV epidemic.

The shaved-in style re-entered the cultural playing field in 2014, quite literally, when Brazilian soccer players began denoting their playing number by shaving it into their undercuts. A few years later, a post-Soviet adidas interpretation was seen on the runway at one Gosha Ruchinisky’s shows in Yekaterinburg, Russia.

As lockdown continues to force people self-experiment with maintaining their locks, maybe the shaved-in swoosh will see a come-back in 2021, perhaps something to try with the Telfar logo? Or Fendi à la Kanye West in 2009?