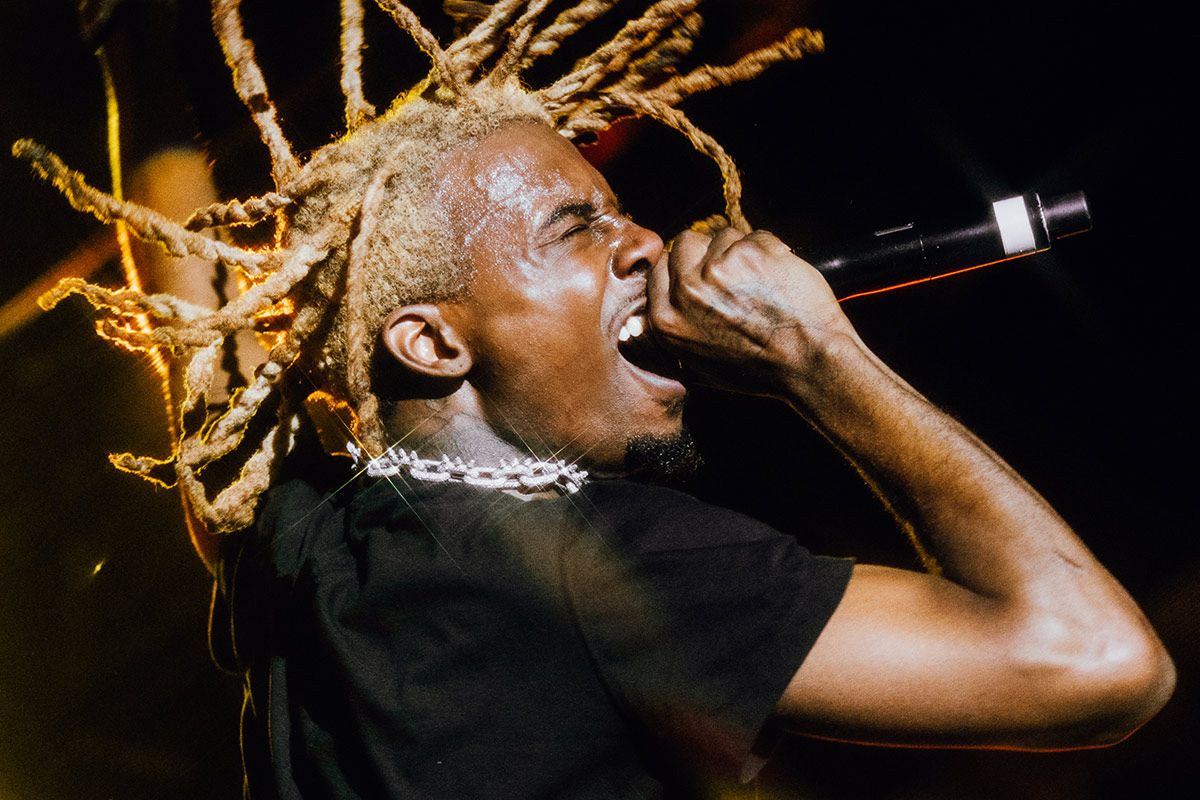 “Why does my favorite rapper sound like an alien giving birth?” you may be wondering after listening to a few of the tracks from Playboi Carti’s Whole Lotta Red – his years in the making opus finally released on Christmas Day.

Take “JumpOutTheHouse.” It begins somewhat mildly by Carti standards, with only a squeaky voice and mega-repetitive hook. Around a third of the way in, he ramps it up. His voice becomes startlingly strained, teasing collapse. And then, at 40 seconds, he explodes into a never-before-heard inflection that’s like a cross between a dying parakeet and Gollum melting in a K-hole. Following the lyrics is a lost cause. He’s moonwalking on his own planet, gurgling in his own language, rattling off a reel of moans and chokes and hisses.

Unlike a lot of rappers, Carti has always prized mood over message. It’s about the way his voice shimmers against the amorphous astral beat rather than the literal contents of the verses, most of which could barely be called “lyrical” in any sense of the word. His dulcet croons and hypnotic ad-libs have all the shrill opulence and mindless sanctity of a church choir. It’s music to fall into a trance to, tunes ingeniously designed to disable your ability to think. Tap in, zone out. Carti specializes in effing the ineffable, that feeling midway between ecstasy and exhaustion when you’ve danced for hours and all you can let out, with one shallow breath, is a wobbling cough or a squeaky scream.

Carti’s style is something this author likes to think of as “brainwash beats” — slowed and reverb, 8D audio, unintelligible ASMR — the stuff crammed with subliminal whispers and vast, velvety soundscapes that massage your brain all over. Although Carti’s music is far from what you’d find on a yoga playlist, it provides the same sort of bodily transport. These delectable nonsense sounds are so fun and refreshing to hear because they temporarily take you out of the human world of social media anxiety and political tumult. They melt your mind in a sea of meaningless syllables.

Back in 2018, Carti debuted what many affectionately referred to as the “baby voice” — a hyper-slurred warble that built on the madcap styles of fellow freaks Young Thug and Future. Adorned in producer Pi’erre Bourne’s glittering beats, the voice sounded like a transmission from another planet. Fans and critics adored it. Within a year, Carti moved into his next evolution: the fetus voice. Every leaked track sounded more diaphanous and decomposed than the last.

Finally, with Whole Lotta Red, we have reached the ultimate stage, the alien voice: a stream of gorgeous, pitch-perfect nonsense, almost completely indecipherable to the human ear. Call it scat rap.

On the vamp-themed Whole Lotta Red, Carti explores his fetish for vocal madness in a more baleful way than ever before. Until now, his baby tones had almost always been padded with twinkly instrumentals that accentuated their dreamy quality. Here, dreams morph into nightmares; sinister, body-wobbling beats give Carti the Vampire Squeaker a demonic aura as he shrieks about killing folks and how taking his shirt off makes girls asphyxiate in awe. Where before he floated in the cosmos, now Carti has come down to conquer Earth. Imagine him blathering to his lean-guzzling, Iggy Azalea-hating fans from atop the Tower of Babel.

There’s no shortage of thrills, from the bone-breaking moshpit banger “On That Time” to the warped, low-end tornado “New Tank.” Wavy and vaporous, “Sky” is like gliding through a purple-pink horizon. Carti’s always had a killer ear for selecting beats — perhaps the best here is “Vamp Anthem,” which transfuses a riff from Bach’s organ epic “Toccata and Fugue in D Minor” to effectively create Dracula’s walk-up song.

The most exciting tracks are the ones where Carti pushes his vocalizations to new dimensions of deranged. If Carti was experiencing painful labor on “JumpOutTheHouse,” then on “Teen X,” he’s his own offspring, a Martian (Cartian?) infant. Deliciously drenched in IV tubes’ worth of Auto-Tune, his vocals sound like syrupy hiccups hula-hooping over the bouncy bassline and sugar-coma synths. Future hops on to provide his own imitation of the baby voice, a croak that seems surprisingly understated compared to Carti’s twitching coos. The result of the two together is a sort of aural family photo or genealogy frozen in time: older & younger brother-alien attached via umbilical cord. It’s a tour de force in freaky flavors by two of hip-hop’s nuttiest supervillains.

If there’s a gripe to be had, many tracks which leaked in the two-year interim between Die Lit and Whole Lotta Red, the most fringe and eargasmic ones — like the swirling, dazed “Pissy Pamper” — are AWOL here. Particularly disappointing is the absence of “RIP Yams,” in which Carti deployed his craziest style to date, exaggerating saliva noises and accidental spits into a sort of ad-lib mosaic, a drugged-out sound effect constellation.

For someone like Carti whom critics call “avant-garde” (yikes) and whom oldheads love to hate, there’s always the risk of self-parody, of trying too hard and winding up humiliated. But if you’ve come this far, why not go all the way? Whole Lotta Red is a triumph in radically committing, pushing self-parody all the way back around to the initial act of pure creation.